Getting around in New Zealand is fairly straightforward—the two islands are small and compact, plus the country seems to have been designed for backpackers with plenty of transportation options, including hitchhiking.

Yes, hitchhiking, aka standing on the side of the road with your thumb up and a sign, waiting for a car to stop and take you to your next destination, or at least closer. Hitchhiking, aka relying on strangers’ goodwill. Hitchhiking, the same activity your parents and the media warned you about.

“Are you guys crazy?”

No! Well, probably not.

Let’s put it this way. If you’ve ever wanted to try hitchhiking, New Zealand is a good place for it. There are practical reasons to give it a shot—maybe you don’t have a driver’s licence or your budget is running low. Maybe you just want to meet people and discover new places.

Tempted? Read on for practical and safety tips!

Ready to bust some myths?

New Zealand is an extremely easy country for hitchhiking—true or false?

Hitchhiking is legal in New Zealand and the country is relatively safe, so in a way, yes, it’s a good place for hitchhiking.

However, it doesn’t mean that drivers feel compelled to stop every time they see a hitchhiker on the side of the road. Kiwis are friendly but they never signed up to be backpackers’ personal free Uber. Much like anywhere else in the world, you could get a ride—sorry, a “lift”!—five minutes after showing up at a stop sign or five hours later.

Drivers who slow down and open their door do you a favour. Sure, you’re offering to be a friendly, entertaining and interesting passenger for a little while but that’s it, and that’s not much.

So remember that there’s no law that says hitchhikers have to be picked up and stop whining when you see “empty” cars that could have taken you—they didn’t, just move on, it’s fair game!

These are stereotypes. In practice… well, it depends.

Safety is a concern for everyone, drivers and hitchhikers. Follow basic tips, trust your guts and avoid potentially dodgy situations like hitchhiking late at night in the middle of nowhere.

Forget about hitchhiking as a group or as a couple—true or false?

It might be easier for solo travellers but couples or friends can successfully hitchhike their way around the country. On the New Zealand forum, Julie said this about the four drivers who helped them go from Tongario to Whakapapa: “I don’t know if they remember us but a year later, we still do!”

That said, groups of more than two people may find it difficult to hitchhike, including for practical reasons (not enough room in most cars!). 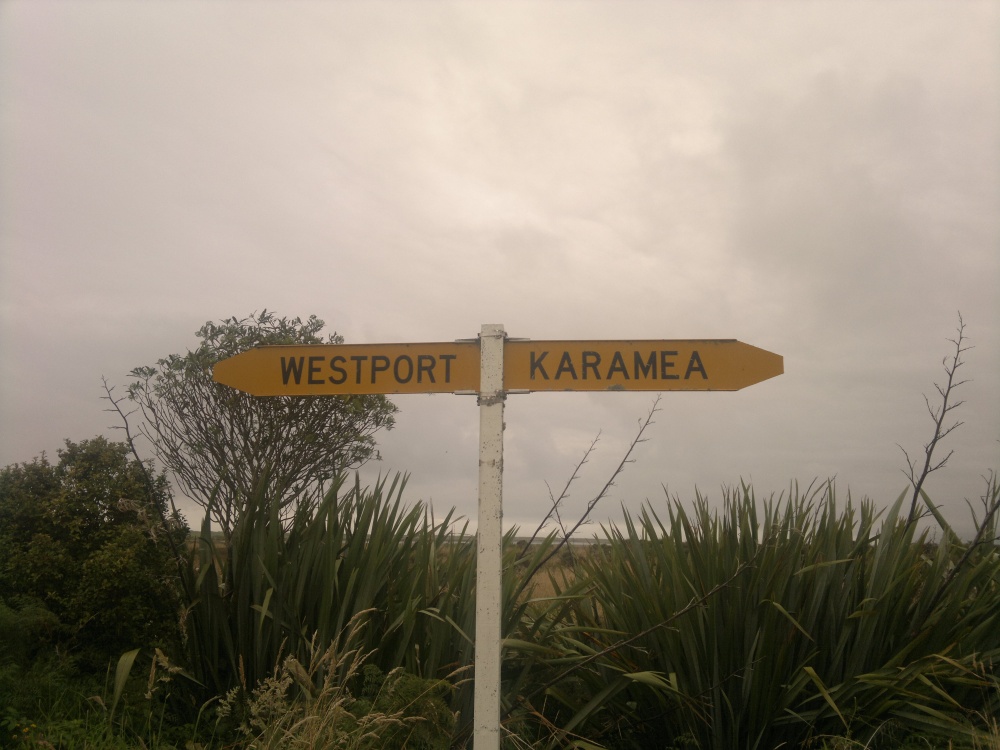 You’re in! You have your backpack on and you’re checking the map, planning for the day… follow these tips to make this first experience easier!

In a comment, a Working Holiday maker wrote that she saw hitchhikers with “free cookies!” signs instead of the traditional sign with a destination. This is a cool idea to attract attention and win over drivers—plus, really, who doesn’t like free cookies?

Yes, your looks matter—well, not a six-pack or professionally done makeup, but your general appearance. Would you feel like picking up a hitchhiker wearing dirty, smelly clothes who looks like they’ve just spent two weeks camping in the mud? Sure, you’re a backpacker, but you can comb your hair once in a while and be relatively put together.

No need to look as polished as for a job interview but you still have to look trustworthy and… well, “normal.” Clean clothes, shoes—footwear is not optional!—and a friendly smile should help.

You might want to avoid message t-shirts or very noticeable accessories that make a statement. Some people will find your “all I need is a little weed” tee funny but others may pass on the chance to debate pot legalization for the next 200 km. 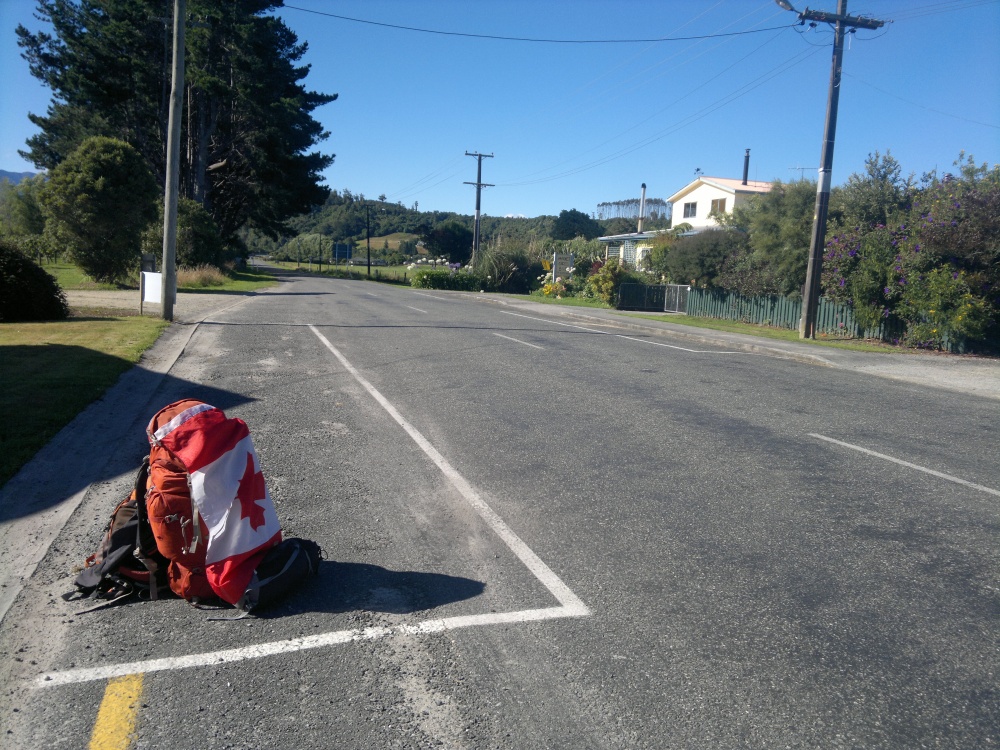 Highways in New Zealand don’t really look like highways, more like secondary roads with large shoulders on both sides and a speed limit as “low” as 100 km/h. There isn’t as much traffic as in many other places in the world—after all, the population is under 5 million!

Technically, you can hitchhike pretty much anywhere. However, some places are more dangerous than others—right in the middle of a curve, on top of a hill or at a busy intersection.

You’re a backpacker, therefore you have a backpack. Some hitchhikers hide their gear because the driver may think they won’t have room in the trunk. Others would rather clearly show much luggage they have to avoid wasting time with drivers who can only offer a seat in a small car.

On a personal note, I always stood beside my backpack throughout my 5,500-km-long trip in New Zealand and it wasn’t an issue most of the time.

Is it worth holding a sign with your destination written on it? If you know exactly where you need to go, it can help with getting a direct ride to destination. However, you may be missing the chance that a driver could bring you closer to destination.

You can totally hitchhike without a sign and if you decide to use one, you can also be creative with a friendly, funny or unusual message. If you’re holding a sign, make sure to stand in a low-speed area or at a traffic light otherwise drivers won’t have the chance to read it.

Chloé had a super creative idea—she designed a sign with reusable arrows!

The hitchhiker code of courtesy

Don’t think for a minute you’ll be an exotic and rare sight in New Zealand—there are plenty of backpackers fighting for a ride all over both islands. You should see the outskirts of Queenstown on a sunny summer morning… there are more hitchhikers than cars!

If you end up in a busy hitchhiker spot, the best solution is to walk a bit further to improve your chances. If there’s nowhere else to go, common courtesy is to stand further. When you’ve been waiting for a ride for an hour, it’s infuriating to see a newcomer stand ten metres ahead of you being picked up right away. Karma, people, karma…

Note that sometimes, it’s good to stand out. I tied an easy-to-spot Canadian flag to my backpack. Not only are the many Canadians with a vehicle likely to pick up a fellow Canuck but it’s a good conversation starter with anyone else! 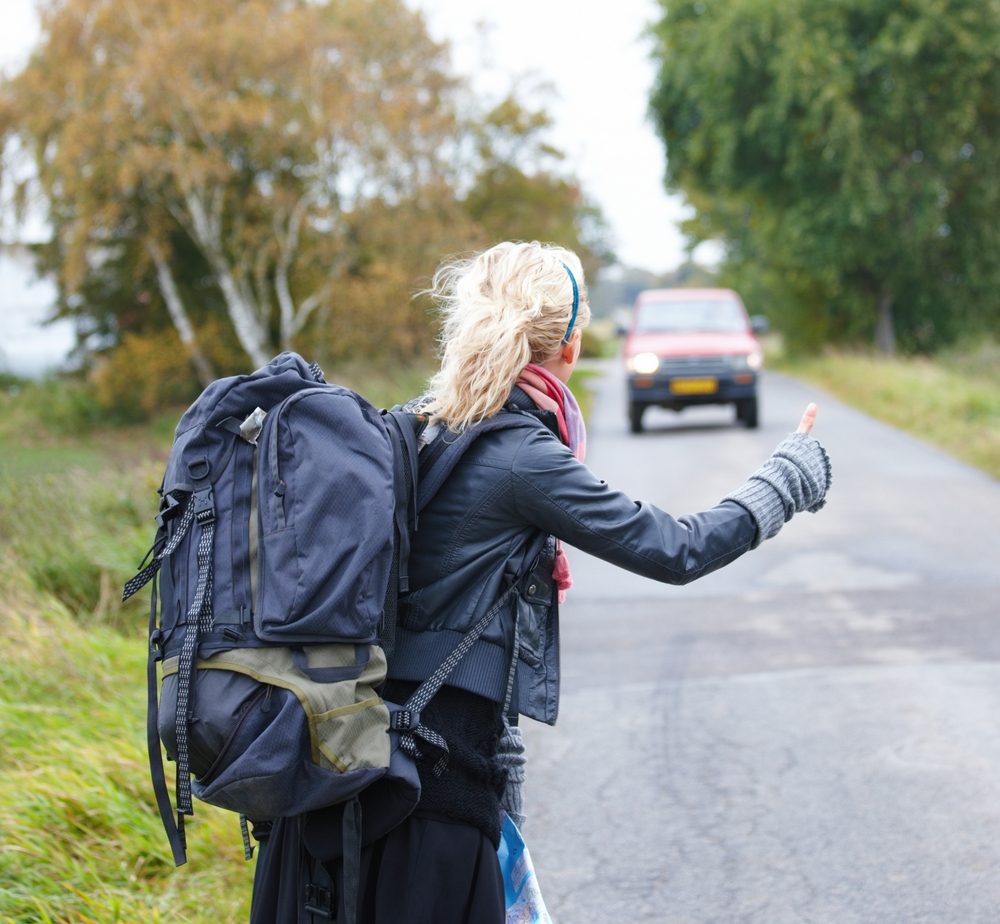 Remember that even in a comparatively safe country like New Zealand, bad things happen to good people.

Always, always trust your gut. Don’t climb in if the driver or the vehicle makes you feel uneasy, even when you’re desperate for a ride. Women often have a sixth sense for male drivers who may display inappropriate behaviour—a lecherous look, strange questions, etc. Just skip that ride.

Watch out for dangerous drivers. If the car is a dump, if you can see open cans of beers and if the driver looks high, wait for someone who isn’t driving under the influence. You probably don’t want to experience a car accident in New Zealand.

Getting robbed may also be a concern. Keep an eye on your gear. For instance, when you’re putting your backpack in the trunk, make sure to leave the passenger door open to prevent the driver from speeding away with your laptop but without you.

That said, don’t be paranoid! New Zealand is a good place for hitchhiking. Just use common sense!

The driver will almost always ask where you’re going. Greet them and answer the question! You can have a very specific place in mind (a city or even an address), be more flexible and mention an area or even say something along the lines of “as far as possible!” (Just add that you’re not running away from the police!)

Some drivers will offer you a five-minute “lift” or a 300 km ride. Even a short ride can help you—another spot may be better, you could be closer to public transit options or just to break a jinx if you’ve been standing at the same stop sign for an hour!

It’s up to you to accept or decline short rides but it pays to keep an open mind. Some drivers don’t want to commit to a long ride at first but may change their mind once they realize how friendly you are! Do decline the ride if you feel the situation is potentially dodgy, though.

Many drivers pick up hitchhikers to have company during a long trip and many backpackers hitchhike to meet new people, so chances are you’re going to chat!

Be a good conversation partner. Listen to the other person and avoid potentially hot-button issues. If you’re debating, disagree respectfully and always remain civil. You could also quiz the driver on the area and get tips on where to stay, where to eat, local culture, etc.

Finally, don’t light up a cigarette if the driver doesn’t smoke!

The end of the trip

The driver will often ask you where you want to be dropped off. Be flexible so that the driver doesn’t have to go out of their way or get stuck in traffic. If you’re looking for a place to stay, ask for advice—you could get a ride directly to the hostel!

Don’t forget to thank the driver profusely, pick up your backpack and off you go!

Note that you can always exchange email addresses or invite the driver for a drink or a meal, if appropriate.

I hitchhiked my way around 5,500 km of South Island (… or maybe 6,000 km!) for five months. I was able to go wherever I needed to go, although occasionally, I waited for a long, long time for a ride.

As a hitchhiker, you’re relying on people’s goodwill. You can’t be too picky and you must accept that you’re not 100% in control. You also have to plan for hours wasted waiting in less desirable places, deep in backcountry. Yes, you may occasionally wonder what the hell you are doing there…

But hitchhiking is also a great way to meet interesting people—best of all, you’re free as a bird!

Michelle, a Canadian on a Working Holiday in France