The Working Holiday Visa Adventure as a Solo Traveller

In late 2005, we came to Canada as a couple on a Working Holiday Visa (WHV). Then, I headed to Australia alone under the same visa program. I don’t think it would be a stretch to say that if in both cases I was a WHV holder, the two experiences were completely different.

Travelling Alone or With a Partner, That Is the Question

What’s easiest—travelling alone or with a partner? What’s the most practical, comfortable choice? What option offers you the most freedom?

At the gate, as I was waiting to board the aircraft that would take me to Australia, I overheard an argument between a little red devil and a little white angel. The devil on one of my shoulders kept on whispering to me that I had made a very silly decision, that it was going to be hard to find work. “How will you even meet people?” he laughed. “You’re going to be all alone, tough luck, how depressing!” But the angel perched on my other shoulder cut him off to remind us that my English was pretty good and that I could probably land a job and meet people. “You’re travelling solo because this is your life, your challenge. You will discover a new country down under and this is most definitely not a bad move!” the angel reminded me. The battle between the two creatures and my own inner conflict lasted for several minutes until all passengers were finally called for boarding. I stepped onto the plane that would take me where I had the best year of my life. Two days later, I turned 22.

The Best Year of My Life

This trip was ten years ago, yet I still claim these 12 months spent in Australia were the best year of my life. You could assume that life didn’t exactly meet my expectations lately but no, this is not why I stress on this “best year of my life” statement.

I had a good time over the past ten years. I believe I can say I’m happy. But I also think my current well-being has roots in Australia—I was the main character of my very own “Bildungsroman” and it remains “the best year of my life” because it represents such a pivotal moment in it. Over the course of these 12 months, I was given what I was waiting for—even though I was not even aware I was on a quest—, I was offered the chance to push my limits, I was handed the opportunity to feel more alive than ever before. This year marked a new beginning. It’s not easy to find the right words to describe my experience without being too cliché—yet, I have to admit this is the year where I found myself and discovered who I was through ups and downs. It was a liberating experience and all and in, I think I just wouldn’t be able to describe it as such if I had travelled with a partner.

But back to the main topic of the article. From my experience, travelling with a partner is comforting. You’re never alone, mingling strangers isn’t as daunting and it’s easier to fit into a group since you’re already a pair. When you’re with someone, you feel stronger, more confident. You help each other, communicate, listen, give and receive support. Experiences shared with a friend or a loved one strengthen your relationship and create memories that are often magical because someone you care very much about is part of them.

But when you’re travelling as a unit, “your” trip turns into “our trip”—places he/she wants to explore, activities he/she wants to participate in, money he/she wants to spend (or doesn’t!), friends he/she enjoys hanging out with… If you ever feel like going somewhere else or do something different and if your travel partner isn’t exactly on board with the plan, you’re stuck. On one hand, if you go your own way, you feel like you let your partner down because the deal was to spend a year together, yet if you give up on your own plans, then you have the nagging feeling that you’re missing out on unique opportunities.

It’s comfortable to be around a travelling partner and you’re less likely to engage with strangers. Occasionally, you do feel like meeting new people but often, the rest of the world doesn’t matter much because you’re already with someone and after all, one partner is enough. It’s perfectly understandable. This is a situation I experienced in Australia, when I paired up with a French woman I met in Sydney. We travelled together for a few months and she became my best friend.

If you’re looking for a travel partner, I’d say it’s best to avoid leaving with someone you don’t know well (for instance, someone you’ve just met online). If you do, set a few basic rules—for instance, you can suggest to fly to your shared destination together and make a booking in the same hostel for the first few nights, then take it from here, depending on the chemistry between the two of you.

Make sure you both have realistic expectations. As an individual, you will meet people, seize various opportunities, be offered chances, develop different interests. You won’t always be on the same page. If you are at a crossroad—metaphorically and literally!—and feel like taking different paths, it’s probably best to do so and meet up again down the road. However, that’s easier said than done if you bought a camper van or a car together…! Whatever happens, just remember you didn’t end up that far from home to spend your time arguing with a partner.

If both your partner and you want to share an experience and create common memories, that’s great. However, if you only paired up because going alone wasn’t an option, you’re heading straight for disaster. Basically, if the travel bug only bite one of you, it’s best to go solo. Every single backpacker who travelled to Australia alone reports that they were never lonely. I think I can count on the fingers of one hand the numbers of times I was all by myself and didn’t want to be. You’ll meet hundreds of people—roommates, travellers in hostels… 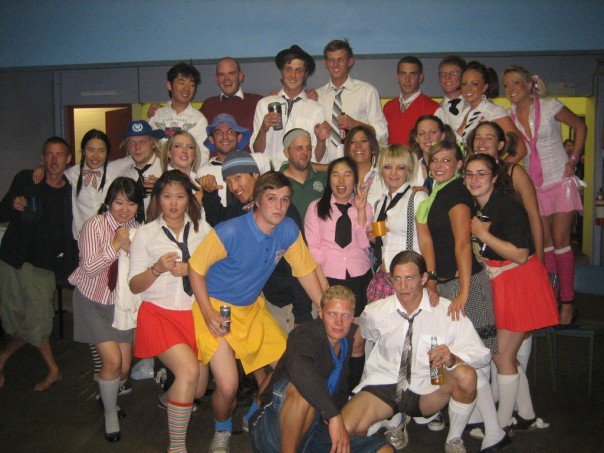 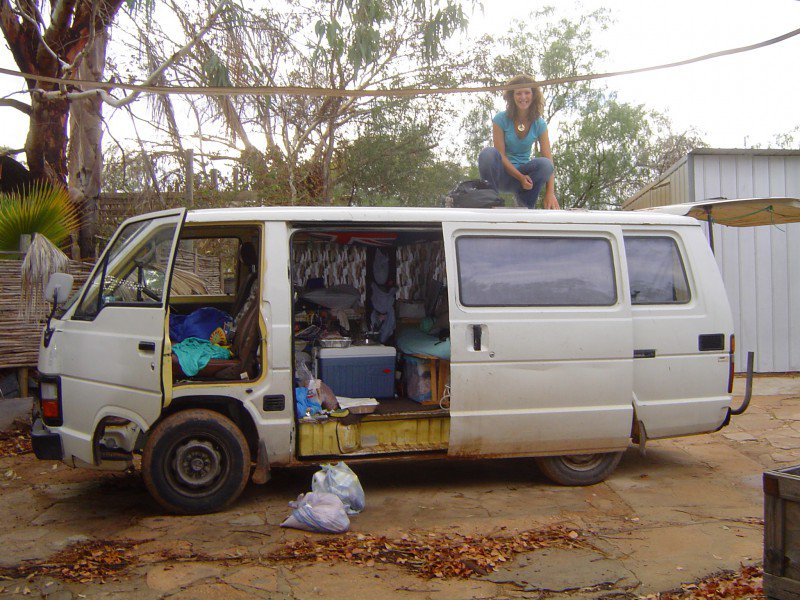 There are people you’ll forget just a few days after meeting them while others will leave an unforgettable memory even if you only hung out together for a couple of weeks. This is probably the best way to describe an Australia Working Holiday Visa experience: planes, trains or buses bring a bunch of travellers, these people move around, leave and start all over again somewhere else. I crossed paths with amazing people. And if you’re reading this from Australia, do enjoy every moment and every person you meet. I’m sure you do—and I think I did as well—but it’s only much later that you’ll realize you had no idea that ten years later, you’ll still fondly remember that person, that place, that day.

This is what I was able to do, as a solo traveller. First, I spent two months in Sydney in a shared apartment with awesome roommates. I met great people, including a few French travellers I’m still in touch with today. Since I was by myself, I was able to make decisions without pressure and do whatever I wanted—like leaving Sydney to go to Tasmania and show my mother around and head to Melbourne to live a short love story with a Frenchman I had met in Sydney just weeks earlier.

I eventually left the city because my initial plan had been to explore a country instead of settling down in a specific place. On my own, I slept in an airport, called contacts for job opportunities first thing in the morning, was sent to Home Hill—a small town in Queensland—to pick melons. I lived in a working hostel for about two months, during which I met people from all over the world and created unforgettable memories. On my own again, I decided to travel along the East Coast, where I marvelled at the impressive Great Barrier Reef and spend a weekend in Nimbin where I met up with three friends to celebrate “MardiGrass.”

As a solo traveller, I was free to go back to Home Hill where once again, I worked and met more amazing people, then I left to drive around parts of New Zealand with a camper van and my best friend—we enjoy our time together before she headed back to France. As a solo traveller, I ended up travelling through the Australian Outback from South to North, across the desert, then I spent three months in South-East Asia.

They say money doesn’t grow on trees, but as a solo traveller I spent the following three months earning a paycheck planting trees! I lived close to Darwin, in a caravan park right behind the Roadkill Café and I spent my days outside, under the sun, breathing fresh air, enjoying people, opportunities, Australian sunsets and reminding myself I would have to go home soon.

As a solo traveller, I eventually boarded a flight to Singapore, then another flight to France with a heavy heart and tears in my eyes. I wasn’t sure I’d be able to leave, to actually step onto the aircraft and say goodbye to Australia. I did so much, more than I had done so far in my life, I made choices—good and bad—, I made sound decisions and crazy ones, I went here and there, I followed him, her and them, I spend time on my own, I changed my mind and changed my mind again … and no one influenced me because I was a solo traveller.

When you’re on your own, you go do your own thing, you call the shots, you learn, push your limits and challenge yourself. It’s scary at times when you wonder where you’re going but eventually, you realize that this is what travelling is all about—jumping into the unknown and landing on your feet. There are roadblocks here and there but experience teaches you how to overcome them and move on—and yes, it’s part of the experience.

This year I spent in Australia taught me so much about myself, about other people, about the world and about life. It I went through millions of emotions, I fell in love with hundreds of people and I freaked out dozens of times. This is what Australia was to me—the best year of my life, months when I felt alive and free like never before. This is probably normal, at one point, most of us need to travel to experience something different and come back more confident, trouble-free, more in tune with themselves.

Just Go for It!

If you’re not sure whether you’re ready to go solo on your WHV adventure, I’d recommend putting your fears aside for just a moment. Don’t let any worry you have influence your decision. Going solo was the best decision I made in my entire life. I don’t even know if I’d do it again (maybe I would, depending on future opportunities!) but I did it and I don’t regret a thing.

Some of you are scared to travel alone because they feel their language skills aren’t good enough. Well, if you go with a partner, it’ll be harder to practise the local language. When you travel in pairs, you can easily create a little bubble of comfort but if you’re on your own, you have to take risks and speak out for yourself. Once you make friends and even find love (and it’s probably worth stressing that pillow talk in a foreign language is a great way to improve your fluency!), your communication skills will undoubtedly get better.